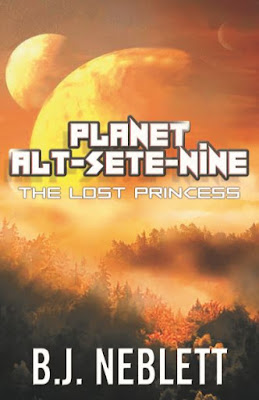 Jake is a young up and coming game designer for a major video game company. He gives a beta version of his latest creation, an advanced game called Planet Alt-Sete-Nine to his girlfriend Haylee for testing. However it isn't long before Haylee is completely engrossed with playing the sophisticated game, to the exclusion of everything else. To Jake's horror, Haylee soon loses her memory, finding it impossible to distinguish between reality and the alternate reality of the game. Meanwhile, the game's programmed groundbreaking artificial intelligence seems to be taking over not only the game, but Haylee’s life as well. Complicating matters are Jake's bosses pressuring him to get the game finished for market. The scene and chapters switch between the action of the game being played out on Planet Alt-Sete-Nine, and the couple's deteriorating relationship, as Jake frantically races to find answers to Haylee’s gaming addiction and the out of control artificial intelligence. Frustrated, Jake is driven into the consoling arms of his oldest and closest friend Barb who just happens to be Haylee’s rival for Jake’s affections. In the end, Jake loses Haylee to the video game. But has she simply run away or has she been swept off to the land of Planet Alt-Sete-Nine?

“A richly imagined fantasy tale that grabs ahold of you and doesn’t let go.”
K.J. McPike author of the Souls Untethered saga

“A gripping tale of the potential for artificial intelligence to undo the established order, taking us through a wonderfully imagined, captivating interface between reality and the virtual reality of next-generation video games. A page turner par excellence.”
Adrian Winstanley author High Hopes Silver Linings

Please feel free to re-post and pass along this blog. Thanks!
BJ Neblett

Posted by BJ Neblett at 4:24 PM No comments: