Paper And An Ancient Art by BJ Neblett

Paper And An Ancient Art by BJ Neblett

Funny what being stuck home alone can bring out in a man. Kinda like recovering from an illness, except when you are sick people come to visit and bring you presents. Which makes me think of being 9 and having the chicken pox or mumps or some childhood plague and my father bringing me a plastic model car to build. If this lock down lasts any longer maybe I should dig out my old model stash and...
But I digress.
A few years ago I was bored (Read: retired from radio and not working) and took an origami class. I've always been very good with my hands and if you read my books, you know I have a vivid imagination, two great assets for an origami-est. (Not sure if that's a word). I found I had a knack for the ancient art, and I still enjoy the occasional paper folding session, although it's surprising how much your fingers forget while inactive. Origami is a great ice breaker and party conversation starter, not to mention it's a great way to impress the ladies. Below are few examples of my efforts over the years. 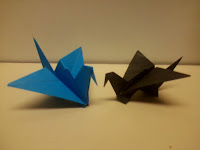 A couple of traditional swans, one of the first things you learn in origami class. Although, I'm not sure why they teach you this right off as they are a bit more involved than some other figures. But it is a good thing to know when dining in Japanese restaurants, as fashioning one is always good for a free side of something! 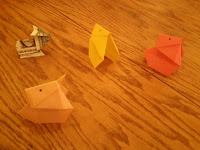 Hand made holiday items are always popular. Here are some Easter critters, three colorful peeps and a bunny made from a dollar bill. 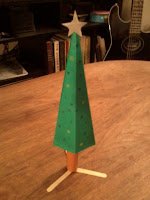 Here's a neat little Christmas tree I made for my friend Alissa. As you can see, it brightened up the celebration we shared at a local coffee shop that year. I am told by purists that using more than one piece of paper and/or different objects, such as popsicle sticks is cheating. But who cares? Look how cute! 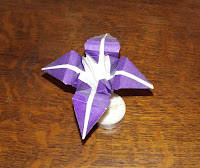 Ladies love flowers and these lilies are no exception. They are actually of my own design, involved and have a crazy amount of tiny folds. The bouquet below was for Alissa's birthday. 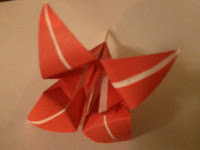 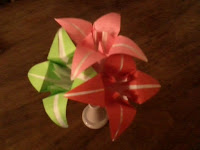 Sometimes I surprise even myself. The two cool planes were designed my me in a folding frenzy. The red fighter is a Star Wars inspired space fighter. The other is a pretty cool rendition of a modern day stealth. To say I was in the zone that day would be an understatement. Try as I may, I've never been able to duplicate it! 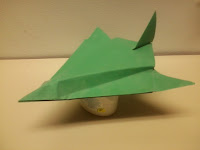 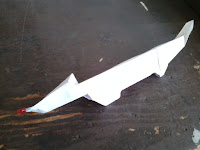 A couple of more animals.

Here we have a Dachshund I fashioned out of two pieces of paper while bored at work. A few days later I was really bored and gave him a red LED nose. It lights and flashes when you squeeze his tail! 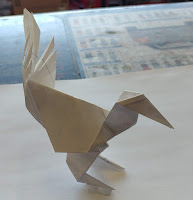 Turkey anyone? Another center piece I figured out myself for the holidays. It is all one piece as are all of my creations except as noted. However I did take the liberty of cutting his tail feathers to make him look more attractive to the hen turkeys!

Here we have a dragon of sorts. Not sure if I was aiming for a dragon or not, but hey, he looks pretty good. 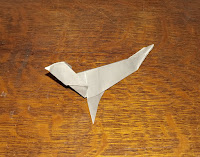 This little guy is a seal, an early creation while I was still taking lessons. Still holding up pretty well, despite his age. 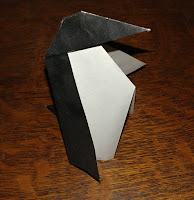 One of my favorites, a cool little penguin. He is surprisingly easy to make, and using the double sided paper brings out his tuxedo! He's another favorite with the ladies.


If I look around a bit I'm sure I can find more, but I think you get the idea. Hope you enjoyed and I haven't bored you too much. Origami is a fun, relaxing pastime, that can be easily learned from any of the instructional books available, or on-line sites. Great for family projects. I just hope my publisher doesn't see the results of the last couple of hours when I should have been writing. Which reminds me, I fashioned three miniature examples of my books complete with front covers to go along with my bobble-head. But that's a blog for another time. Back to writing!
Peace,
BJ
Posted by BJ Neblett at 7:29 PM